Colin received his Juris Doctor with Distinction from the University of Saskatchewan in May of 2019. He has been a part of the MacDermid Lamarsh team since the summer of 2017 when he joined as a legal summer student during law school. He completed his articles with the firm and is now a junior associate. Colin has a general practice in law with particular interests in corporate and commercial law, employment law and family law.

Colin was born and raised in Saskatoon and attended Holy Cross High School. Prior to attending law school, Colin worked as a mine geologist in northern Saskatchewan, having received his Bachelor of Science (Honours) in Geology from the University of Saskatchewan in 2011.

When not working, Colin enjoys spending time with his family at the lake. Colin also enjoys fishing and attempting to play golf. 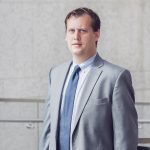